According to TMZ, Lil Wayne was hospitalized this week for what is being reported as multiple seizures.

The rapper suffered from the seizures after recording a music video Tuesday night and was immediately taken to Cedars-Sinai hospital. Weezy was released early the next morning and is said to be doing well.

This is not the first time Lil Wayne has suffered from seizures. Last October, a plane carrying the rapper had to make an emergency landing when he started to convulse on board. 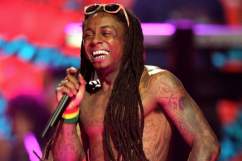