Rumors have been floating around that Ryan Gosling is to play Oscar Pistorius in a biopic about the paralympian accused of intentionally murdering his girlfriend, Reeva Steenkamp, reports The Christian Post.

Pistorius was accused of fatally shooting Steenkamp on Valentine’s Day last month, but the athlete claims that he accidentally shot her after mistaking her for an intruder. Ever since the tragic incident, Hollywood has been working on a script for a movie.

“You’ve got one of the world’s most famous sportsmen under arrest and a beautiful young woman who meets a violent death,” explained a source. “Scripts began doing the rounds within days of the scandal breaking.” 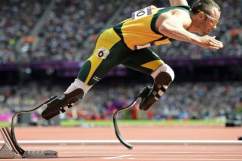 With a movie in the works, Ryan Gosling is Hollywood’s perfect fit for the role, even though The Notebook star recently announced he was going to take a break from acting. After busying himself with movie after movie, Gosling said that he plans on relaxing to rediscover himself.

“I’ve lost perspective on what I’m doing,” Gosling said. “I think it’s good for me to take a break and reassess why I’m doing it and how I’m doing it. I need a break from myself as much as I imagine the audience does.”

However, the source said that executives won’t take no for an answer.

As for the role of the disgraced athlete’s girlfriend, Charlize Theron has been mentioned to play Steenkamp.