@perezhilton you’re not ugly! I was lying because we haven’t talked in person in a long time. Please stop being mean on twitter! Thx!

Perez Hilton is an ugly gay bully. If you like him I won’t be your friend.

Amanda Bynes has crossed a line in her Twitter war with celeb blogger Perez Hilton — launching this tweet (above), which may be taken as a homophobic slur by the gay community. 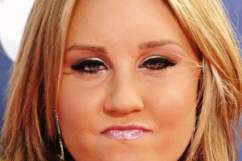 Perez, always quick to retort, to, well, anything, had this to say in response:

In the last week alone, @amandabynes has called ugly @rihanna, @lancebass, @chrissyteigen, @courtney and am I missing anyone else?

If you’re ugly and no one will suck your dick, buy a Fleshjack and enjoy! Be ugly and happy; better than pretty and miserable! #Perezism

Perez then announced to the world that:

He accompanied it with this image: