Rihanna. That is NOT what you're meant to be doing with your microphone. http://t.co/SOYs2u67qP

It seems that Rihanna gave one of her fans a little more than a love tap during one of her performances on tour in the UK. While Rihanna was walking by singing “We Found Love” and dragging her hand through the crowd, one of her fans might have held on a little too tight. Rihanna’s reaction..? BAM! She turned around and whacked the fan with her other hand, reportedly in the face, and swiftly kept moving. Too bad for her fan that she happened to be holding a mic in that hand! Ouch.

Check out the live video of the incident below!

However, some fans are saying Rihanna’s move was an accident.

Worry about bey RT @BeyonceHatesMe: So did Rihanna do it on purpose, Or was it an accident?

And others are definitely not!

Rihanna hitting one of her fans because she wouldn't 'let go' and don't bother saying it was an accident!

Do you think Rihanna did it on purpose? Some fans say it’s hard to tell… but isn’t it kind of hard to just turn around and lob somebody in the face by accident? At least it was a microphone and not an umbrella-ella-ella.

Share this if you think Rihanna hit a fan by accident! 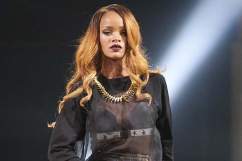 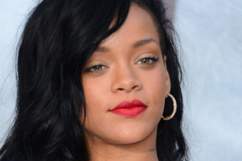