Kermit and the gang are back, in the first teaser trailer for the Muppets Most Wanted, a film that restores the titular Muppets to their former glory. After touring the world with the band back together, the Muppets run into a bit of trouble when they run into Kermit the Frog’s doppelganger, a world class criminal named Constantine that gets the Muppets in quite a bit of trouble.

Directed by James Bobin, the film stars Ricky Gervais, Ty Burrell and Tina Fey, who, in a ridiculous departure, plays as a Russian GULGAG officer. Muppets Most Wanted will release in theaters next year on March 21st, 2014. 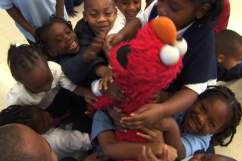 New On Netflix: Being Elmo: A Puppeteer’s Journey