It’s a viral video with around nine million views on YouTube. The “Worst Twerk Fail Ever” video was a bonafide sensation. The video made its way on to every major news broadcast in the country, but tonight, Jimmy Kimmel revealed on his chat-show that it was all a hoax, a hoax he was behind.

Kimmel showed the video with the full ending where the popular chat show host saves the day. It’s also revealed that the woman in “peril” is a professional stunt woman named Daphne Avalon! 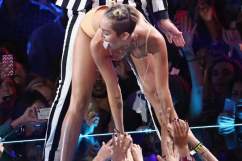