The film is described as “the most insane hidden camera road trip captured on film,” where:

86-year-old Irving Zisman (Knoxville) is on a journey across America with the most unlikely companion, his 8 year-old grandson Billy… Along the way, Irving will introduce the young and impressionable Billy to people, places and situations that give new meaning to the term “childbearing.” The duo will encounter male strippers, disgruntled child beauty pageant contestants (and their equally disgruntled mothers), funeral home mourners, bike bar patrons, and a whole lot of unsuspecting citizens.

We had the opportunity to chat with Knoxville and the film’s director, Jeff Tremaine, about their experiences leading up to and making the movie.

HEAVY: So what was some of the thought process leading up to making the movie? Obviously the character comes from when you guys used to dress-up as old people on Jackass. What made you go just the grandpa route? Was there ever a thought to add a grandmother character, too?

HEAVY: So maybe Bad Grandma as the sequel?

KNOXVILLE: I’d be up for it. We’ll see how it goes.

HEAVY: Awesome. Thanks so much.

HEAVY: So what are some of the challenges with working on a hidden camera movie?

TREMAINE: [laughs] There’s a lot. I mean, hiding the cameras and not getting busted. And getting the people to sign releases after you’ve fucked with them.

HEAVY: Did you find anybody not really wanting to work with you on that?

TREMAINE: Like finding people that didn’t want to be in our stupid movie? We found a few of them.

HEAVY: Was there any super narrow-minded people like that? Like in Borat the laughs came from finding the humor in normal, everyday people.

TREMAINE: Not narrow-minded people, no. I mean, there was a dad in the beauty pageant scene that did get upset. But he had the right to be upset. This movie isn’t about making people look stupid. We’re out to do stupid stuff in front of people and asking them to be normal. Sometimes it’s not that hard, but sometimes he [Knoxville] does get into a conflict with people and it ends up being 50/50.

HEAVY: Thanks so much. We’re excited to see it.

Bad Grandpa is in theatres everywhere tomorrow, October 25. Be sure to check it out. 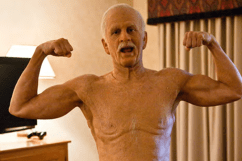