We’d like to say it isn’t true, but the Jonas Brothers have completely broken up. Their Twitter page has officially been deactivated.

After all the rumors surrounding the trio, it looks like there may be a lot more truth than gossip to the fights and addiction stories that have surfaced recently. 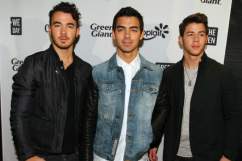 UPDATE: The band’s publicist, Jesse Derris, has confirmed the breakup to Us Weekly and the Jonas Brothers will appear on Good Morning America tomorrow morning to discuss the news.