Kristen Bell, 33, and Dax Shepard, 38, have been together a long time, but it seems the two have tied the knot in an impromptu service at the Beverly Hills County Clerk Office on Thursday, October 17, 2013, according to TMZ. TMZ reports:

According to eye witnesses, Kristen and Dax went to the clerk office just to get their marriage license — but when a court employee offered to marry them on the spot, they agreed … and conducted the ceremony in a nearby courtroom.

Apparently, Kristen has talked about wanting a courthouse ceremony in the past as she was quoted saying:

I feel like we get enough attention in our daily lives and we just want something sort of private that involves pen and paper.

How cute! Congrats to the newlywed couple!

The couple has a 7-month-old daughter named Lincoln and Bell supposedly cried through the ceremony (out of happiness of course). Bell and Shepard became engaged in 2009 and vowed to get married once same-sex marriage bans were laid to rest, so when the U.S. Supreme Court overturned the Defense of Marriage Act, it was game on for the love birds. 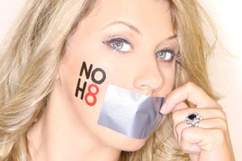