The tit-for-tat war between Miley Cyrus and Sinead O’Connor rages on with O’Connor appearing on a chat show in her native Ireland to tell Cyrus:

We can all get our tits out, that is very easy.

On The Late Late Show, O’Connor also says that Miley is simply “too young to understand” the music industry, and O’Connor doesn’t think Miley should be licking sledgehammers either. O’Connor also took aim at Simon Cowell and the culture of talent show fame, saying it was “murdering rock and roll.”

Sadly the above clip doesn’t show the “tit” comment. The official YouTube channel of the broadcaster seems to have forgotten to include that gold. The transcribing of the interview comes from The Journal. 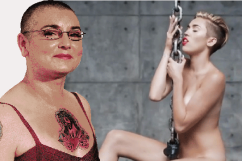