The various comic-con events that happen during the year are known for embracing different types of entertainment. For San Diego, movies are the dominant force while New York supports numerous T.V. shows that will be arriving on the small screen in the upcoming weeks. The CW has decided to air one of its new pilots called ‘The 100‘ during this year’s festivities but sadly this one may not be worth a watch.

Taking place in the future, the pilot opens upon a spacecraft hovering above Earth called “The Ark.” Society has migrated into space after a supposed nuclear war (the graphic they use to show our planet shows no signs the environment looks destroyed). In order to stem population growth, kids over the age of eighteen are locked up for very minor offenses. Every year, 100 of these “inmates” are sent down to earth to scope out the landscape to see if its sustainable.

The first episode essentially feels like a televised version of The Hunger Games with rival factions forming alliances and the groups of kids doing anything to survive. Continuing the trend the CW seems to love, the acting is pretty stale and cliche but of course the stars are all generically attractive. The only recognizable performer is Grey’s Anatomy Isiah Washington who only appears in the pilot briefly. You never feel a sense of danger watching these “tributes” navigate this supposedly hostile terrain. Of course, there is a twist at the end but you can literally see it coming reducing the level of shock the writers seem to want. Also, the budget is clearly pretty small even for a pilot since the cameras use THE SAME SHOT over and over when cutting back to the action up in space. 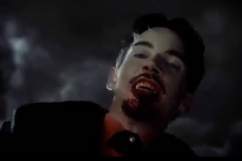 ‘Dracula’ New York Comic Con: The Only Review You Need To Read

Intended as mid-season replacement, its hard to tell if The 100 will survive. The network seems to have changing standards when it comes to ratings but other genre fare on The CW has sustained long seasons with sub-par viewings. The series is accompanying the first novel that arrived on shelves September 3rd but its a little puzzling why they would opt to quickly green-light the television series. No release date has been made available which may be a good thing.