Here’s all you need to know about the drama-filled project.

1. Oprah Paid Lohan $2 Million for It

After conducting a tell-all interview in August with the starlet, Winfrey offered Lohan a hefty sum for the show. The Daily News reported on an advanced clip that was released from the show. In it, Oprah said, “This is just what everyone warned me would happen (working with her). And it is.” After Lohan didn’t come to scheduled filming, Winfrey said, “My truth is, I really do want you to win … but if that isn’t what you want, I’m okay with that. I will tell these guys to pack up and leave today.”

TMZ reported that Oprah herself went to Lindsay’s mother Dina’s house on Long Island to confront Lindsay on her commitment to the project.

2. It’s Being Directed by an Emmy Nominee

Amy Rice is directing the series. She is known for her work on By the People: The Election of Barack Obama.

The Daily News revealed this quote from the series that the newly sober actress uttered herself:

There’s nothing left in having a drink for me. There’s no party I haven’t gone to, nobody I haven’t hung out with, no situation I haven’t been exposed to.

4. It Chronicles Her Life After Rehab

Cameras follow the cleaned-up actress after her 90-day stay at California’s Malibu Cliffside rehab center. The show also features swarming paparazzi that are constantly around Lohan, even as she heads to an AA meeting.

A Long Island native, Lohan returns to New York after a three-month rehab. Her parents, Dina and Michael, also get some face time. They gush about having their daughter back home. Lindsay’s family members are no strangers to reality television. In fact, her mother and sister, Ali, had their own show in 2008, Living Lohan. 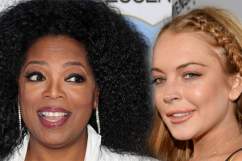