One Direction’s Louis Tomlinson will be making his game debut on February 26, 2014 for the Doncaster Rovers in a football game against Rotherham United. It’s all for charity in aid of the Bluebell Wood Children’s Hospice and One Direction fans are very excited. You can find out all about how to get tickets by clicking here.

Apparently, Tomlinson will be playing his first game at the Keepmoat Stadium in the Final Third Development League. Doncaster Rovers FC News reports that Chief Executive of the team, Gavin Baldwin has stated:

We are pleased to now have a date for Louis’ debut and are looking forward to seeing him against our South Yorkshire neighbours. We are expecting huge interest in this game with fans from all over the world set to visit the Keepmoat Stadium for this unique occasion. I’m sure Louis will be delighted to step on to the hallowed turf and officially become a Doncaster Rovers player for the first time.

By the looks of things, our One Direction boy is very excited for his debut, but a little nervous … It’s okay, Louis. It’s all in good fun. 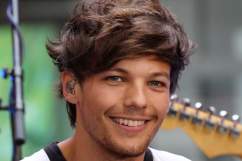