Macklemore and Ryan Lewis surprised commuters by performing their hit song “Can’t Hold Us” on a New York City bus. How crazy is that?! Granted, it was all done to promote the Grammy Awards that are later this month. Nonetheless, it’s pretty awesome. Check out the video footage of the impromptu bus concert. 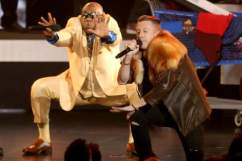 Macklemore Opens With ‘Thrift Shop’ at the Grammy Nominations Concert 2013