Screen legend and childhood star Shirley Temple passed away last night at the age of 85.

In honor of Hollywood’s most famous head of hair, here are some of the best and most iconic movie scenes from Temple’s historical film career.

1. Her Famous Tap Dance With Bojangles

From the 1935 film The Little Colonel, the scene above is the iconic tap dancing scene with dance legend Bill “Bojangles” Robinson. The two were very close, and off screen Temple referred to him as Uncle Billy.

2. ‘Animal Crackers in My Soup’

Shirley Temple : Animal Crackers In My Soup Extended VersionExtended version of the musical video of the film Curly Top.2008-03-04T00:00:07.000Z

The song “Animal Crackers in My Soup” has come to represent the very core of Temple’s sweetness. The song comes from the 1935 film Curly Top.

3. ‘On the Good Ship Lollipop’

From the 1934 film Bright Eyes, “On the Good Ship Lollipop” went on to become one of Temple’s biggest songs.

“Animal Crackers in My Soup” is not the only takeaway scene from the 1935 film Curly Top, named after Temple’s famous head of hair. You can watch the entire film above.

From 1932, staring Shirley Temple only at the age of 4, the short film War Babies is a satire on war as Temple dances in a saloon full of babies posing as soldiers. 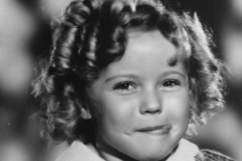