After a hiatus, Glee is back tonight with a new music-filled episode titled “Frenemies.”

As the name implies, this episode will focus on our favorite pairs of friends stirring up drama.

Here are the friends-turned-foes we will see battling it out on screen.

Lambert joined the cast in November of last year as Elliot “Starchild,” auditioning for Kurt’s band.

Tonight, the boys go guitar shopping and a rendition of The Darkness’ “I Believe in a Thing Called Love” is born. Added bonuses are Kurt dancing on a stripper pole and Elliot planting a kiss on Kurt’s cheek.

According to the Hollywood Reporter, Santana auditions to be Rachel’s understudy in Funny Girl. She gets the part, and it doesn’t sit well with Rachel.

According to Entertainment Weekly, this bitter battle causes Rachel to move out of their shared apartment.

This pair compete to be McKinley’s valedictorian.

They join Blaine, played by Darren Criss, to sing “Breakaway” by Kelly Clarkson. 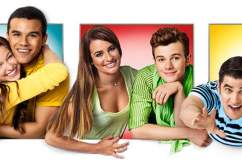 ‘Glee’ Heads to New York for Its Final Season