Glee has a drama- and music-packed show tonight. On “Trio,” be prepared for diva feuds, senior hijinks, and pregnancy drama.

Here are the top 5 spoilers that will take place on the March 4 episode.

DEMI'S BACK ON GLEE I AM NOT OK pic.twitter.com/oYWdHBelFE

The singer/actress is back on the show as Dani, Santana’s girlfriend. This could be her last appearance on the series.

With Emma afraid her biological clock is ticking, she and Will try to get pregnant.

When Emma tells Sue Sylvester, she says, “God, why?!”

3. Rachel Gets Kicked Out & Turns to Starchild

Lea Michele & Adam Lambert I never thought I would get this I love them both so much I have chest pains pic.twitter.com/gIA7PBLNfg

According to Glee.wikia, this will be the start of an exciting storyline and friendship for the pair.
Elliot has no choice but to get stuck in the middle of Rachel and Santana’s feud.

4. Most Songs in the Episode Are Performed by Trios

Demi in the new episode of Glee 'Trio'! #3 pic.twitter.com/tc8LPGHPLs

According to Gleek Out Brasil, these are the performances:

“The Happening” by the Supremes performed by Kurt, Dani and Elliott

“Danny’s Song” by Loggins and Messina performed by Will & Emma

“Barracuda” by Heart performed by Rachel and Elliott

“Gloria” by Laura Branigan performed by Rachel, Elliott and Santana

“Don’t You (Forget About Me)” by Simple Minds performed by Tina, Sam and Blaine

On the Glee.wikia pages, it explains that the group, sad about graduating, breaks into the school to arrange some tricks.

Tina starts worrying about parting from her family at McKinley and missing their lives together.

Principal Sylvester cancels the lock-in, but that doesn’t stop the friends from uniting. 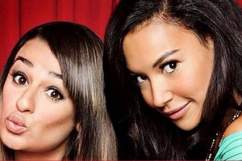