Both men had performed the duet previously, but Peter Travers asks them to do it together on his show Popcorn with Peter Travers on ABC News Now. 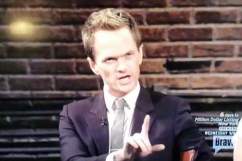 VIDEO: ‘How I Met Your Mother’s’ Les Miserables Confrontation on ‘Inside The Actors Studio’