According to E! News, Scarlett Johansson is going to be a mother for the first time. The 29-year-old A-Lister has been engaged to fiance Romain Dauriac since September 2013.

1. She’s Been Engaged For 6 Months

Johansson and Dauriac pictured together on February 29. (Getty)

This joyous news comes just six months after Johansson and Dauriac announced that they were planning to get hitched.

2. Her Beau is an Advertising Exec

Dauriac is a removal from Johansson’s last boyfriends, Ryan Reynolds and Josh Hartnett. Dauriac is a low-key owner of a French advertising agency.

3. She’s Been Divorced For Less Than 2 Years

Johansson has been divorced from Canadian star Ryan Reynolds since July 2011.

4. Johansson Was in Need of Some Good Publicity

This is the first time that Johansson has been in the news since her controversial Sodastream commercial aired during the Super Bowl.

According to reports, Johansson is the midst of filming that action sequel Avengers: Age of Ultron. Marvel Studio President Kevin Feige has said she has a “very big role” in the movie. 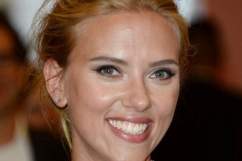 Read More
5 Fast Facts, Breaking News, Scarlett Johansson
Scarlett is going to be a mother for the first time!