In perfect Fincher style like The Social Network’s trailer, the Gone Girl preview has a chilling slow-paced song playing over sometimes violent action as Affleck is first searching for his missing wife, then trying to prove he did not kill her. 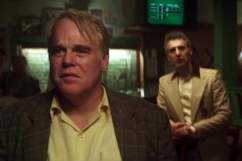