Luis D. Ortiz is the fun-loving, highly passionate broker on Million Dollar Listing New York. Check out the facts on the adorable Ortiz.

Luis Ortiz is the newest addition to the Million Dollar Listing New York cast. He joined the show last season, replacing cast member Michael Lorber, and has been a delightful change to the show. Last season, Ortiz and cast-mate Eklund butted heads badly, but Eklund made the effort to clear things up and all is well … At least it was at the end of last season. Hopefully the two are on good terms, especially since Ortiz has now switched real estate companies and is now a part of Eklund’s firm.

2. He And His Twin Brother Caused Some Family Drama as Teens

Luis Ortiz and his twin brother left his family hanging to make something of themselves when they were just 16 years old. Wikipedia tells the tale as:

Luis D. Ortiz is a native of Guaynabo, Puerto Rico, and grew up with his mother, father, and twin brother, Daniel who he describes as his “extension”. He and his twin brother left their family in Puerto Rico at the age of 16 without notice to his parents, leaving a note to them stating, “If I don’t do this, how do I know if it’s going to work or not?” He didn’t speak to his mother for the first six or seven months in the U.S. and his mother “wanted to kill” him and his brother.

In 2006, Ortiz moved to Manhattan to attend the New York Film Academy. Ortiz then directed and produced a short film called Amalia was shot in Bolivia. Eventually, Ortiz put together another film titled The Theater of the Absurd, but he didn’t like it so it was never shown anywhere.

4. Luis Ortiz Is Animated to Say the Least

Luis Ortiz is a little ball of energy and knows how to show spirit. Check out the above video clip to get just a small sample of Ortiz in action. He goes above and beyond and shows endless passion for life as well as his career. This season on MDLNY, he wants to be taken more seriously so he feels he should dial his energy level down a bit. Hopefully, he doesn’t calm down too much because we love Ortiz just the way he is …

5. Sometimes His Passion Gets Him in Trouble

Last season, there was an apartment that needed sprucing up to say the least. With the help of photoshop, Ortiz lured in tons of buyers, but they were angered by his dishonesty and Ortiz got in trouble with his company as well as The New York State Department of State. In the end, Ortiz learned his lesson and even landed a sale on the apartment. 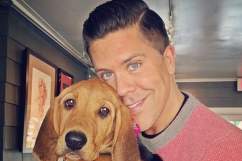 Read More
Bravo, Facebook, Luis Ortiz, Reality TV, Twitter
Luis D. Ortiz is a spicy part of "Million Dollar Listing New York." Read on for the facts on Ortiz and what he brings to the show.