For tonight’s “Latin night” episode of Dancing With the Stars, Ricky Martin will be coming on board. Read on for the facts on what Ricky will be bringing to the show as well as what he’s been up to lately …

Thanks for tweeting along! See you next week for Latin Night with guest-judge @ricky_martin! #DWTS

1. Ricky Martin Will Be Judging & Performing on DWTS

Not only will Ricky Martin be coming on Dancing With the Stars as a guest judge tonight, he will also be performing. The show’s theme for the evening is “Latin night,” so Ricky is a perfect choice.

2. He Just Released the Music Video for his Song “Vida”

“Vida” is the song for the Fifa World Cup 2014 and Ricky Martin just released the new music video for it.

.@Ricky_Martin’s music video for FIFA World Cup 2014 song ‘Vida’ will make you want to get up & dance right NOW http://t.co/K3PormspNv

#RickyMartin is back on the market and calls it quits with partner, Carlos Gonzalez Abella http://t.co/BwohCOfuZV pic.twitter.com/vA2Rs1UuLW

Over the winter, Ricky Martin and his longtime love Carlos Gonzalez Abella decided to end their relationship. The two dated for about 3 years and Abella was with Ricky Martin when he came out to the public as a gay man. For more information on the couple’s life together as well as their split, click the below link: 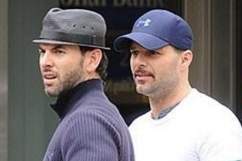 Prior to coming out as gay, Ricky dated Mexican TV host Rebecca de Alba for over 14 years, though they shared an on-again-off-again relationship.

4. He Had His Two Sons Via Surrogacy

Ricky Martin has two 5-year-old twin sons named Matteo and Valentino, who were born via surrogacy in August 2008. The Huffington Post reported that Ricky Martin gushed about fatherhood back in 2011 saying:

I don’t want to sound cliche, another father talking about unconditional love, but man, that’s the way it is. You hear it all the time, but when you feel this other branch of love getting stronger and stronger every day, it’s just amazing.

When Vanity Fair asked the singer what he will tell his sons when they ask about their mother, he replied:

I’m your father and your mother. All families are different. There are families without fathers and some without mothers. There’s nothing to feel bad about. Many great leaders grew up without fathers or mothers, Obama, Clinton. . . . I’ll tell them the truth. I’ll show them pictures of her.

Ricky also told Vanity Fair how much his life has changed since becoming a father, telling the publication:

Now I wake up at seven, I wake them up, we have breakfast together, we brush our teeth, and I go to work, and when I come back home I give them a bath. Before, I would go out with my work friends to the movies or to a bar, although I don’t drink. I’ve learned what’s important: to keep the child inside alive and play hide-and-seek. There are also difficult times and it can be overwhelming.

5. The Man Has His Own Foundation

The Ricky Martin Foundation is an organization that Ricky is very passionate about. It’s mission is this:

We advocate for the well being of children around the world in critical areas such as education, health and social justice. Our principal program, People for Children, condemns child exploitation as a result of human trafficking. We provide children a safer world through the creation of awareness campaigns, community programs, investigations, participating in global forums as well as by operating facilities that promote our mission.