X-Men: Days of Future Past is hitting theaters real soon. As in “NEXT MONTH, BRO!” since that release date is scheduled for May 23, 2014.

A 3rd official trailer for the film has been released and it focuses on Wolverine’s mission to save the future by changing the past. We all get a closer look at Wolvie’s crusade to convince the Professor X of the past to help him alter the future that will be the death of humans and mutants alike. At this point, we all know which X-Men characters will return and make their first appearance in this film, so now we’re just ready to see how their conflict with the Sentinels will unfold.

Enjoy this third story driven trailer behind X-Men: Days of Future Past! 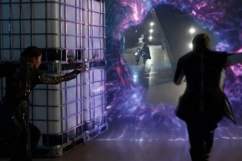