Abby Lee Miller is the guest judge on tonight’s episode of Dancing With the Stars. Check out all the facts on Miller and why tonight may be a very rocky show.

In an interview with OK Magazine, Miller stated that she would be seeking revenge on DWTS favorites Derek Hough and Mark Ballas for comments they had made about her in the past. When it comes to Ballas and Hough, Miller told the magazine:

I think I may make them drop and give me 50! Fifty push-ups. You know what, payback is a bitch. You never know. You never, ever, ever know. I teach my kids that all the time. We go to a competition, we check into the hotel, you get in the elevator, you’re in a restaurant. You don’t know who is judging the competition. You don’t know where they are or anything else. You always have to remember that if you say something negative, it’s going to come back to haunt you.

So, what did Hough and Ballas say about Miller to get her upset? The comments actually came in the form of several tweets. Hough had tweeted the following:

I’m sorry, but this Dance Mom show is straight up abusive. … Kids Run!!!!!!! It ain’t right. Child abuse isn’t right. I’m livid right now … I believe in discipline and a strong work ethic … But there is nothing productive about screaming and making little girls cry over being on the wrong foot.

As for Ballas, he tweeted:

This teacher lady is crazy … completely wrong attitude toward the kids. She’s an A Hole …

Watching Dance Moms… Anyone watch this show?? This teacher lady is crazy… Completely wrong attitude towards the kids, it[‘s] embarrassing. I watched 4 15 mins & switched off, & only reason I wld watch is concern 4 the kids, she needs 2 B fired…#abbeysucks.

This could be a very interesting episode of Dancing With The Stars.

UPDATE: On tonight’s Dancing With the Stars, despite receiving praise from guest judge Abby Lee Miller, dancer Maksim Chmerkovskiy told viewers that he doesn’t care about anything she has to say. Upon hearing Maks say this, Derek Hough stood up clapping his hands in celebration of the insult. Yikes!

2. Miller Is Known for Being Tough as Nails on the Show Dance Moms

Abby Lee Miller has found success in the reality series Dance Moms because of her fiery and hard-ass personality. Dance Moms is a reality show that follows Miller’s teachings and competitions via Abby Lee Dance Company. The show follows the careers of young dancers being taught by Miller and the real action comes from Miller’s harsh teaching style. Have a look at a clip from the show in the above video.

Miller has been doing so well with the show, she has recently scored her own spin-off series called Abby’s Studio Rescue. The show will premiere June 17, 2014 and follows Miller as she visits dance studios all over the country to “help” them with their practices in addition to other things as well.

3. This Past Year Miller Got into a Physical Fight with a Co-Star

Back in November, one of the mothers from the show Dance Moms was arrested for assault against teacher Abby Lee Miller. In the above clip, you can view the fight. 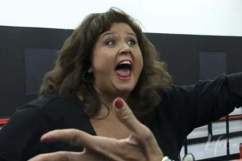 4. Miller Has a Long Past of Judging Dancers

In addition to cracking the whip with her own dancers, Miller has been judging dancers for many years, so tonight’s gig as guest judge on Dancing With the Stars should be no problem for her. Miller talked about her previous judging jobs and how they will help with DWTS saying:

Before Dance Moms I judged dance competitions all over the country. Every weekend I was out judging. I come from a different perspective—one, as a teacher and a mentor I want to see my kids progress. I know these are adults but I want to see them progress to get better and to strive towards perfection.

5. Former DWTS Performer Louis van Amstel Has Also Insulted Miller in the Past

Not only Mark Ballas and Derek Hough had spoken out against Abby Lee Miller’s harsh teaching tactics. Former Dancing With the Stars dancer Louis van Amstel has also been vocal about Miller in the past. Wetpaint reported:

In 2011, Louis took to Twitter to bash the Lifetime show and its featured dance instructor. He argued that Dance Moms should be canceled, but added parents should watch the show just to make sure they “NEVER let [their] kids take lessons from a teacher like [Abby].”

While these comments may be in the past, Amstel has spoken out again via Twitter in light of Miller’s appearance on DWTS tonight saying that “she’s bad news.”