Bobby Cannavale was given the title of “Broadway’s Hottest Outsider” by the New York Times.

However, the New Yorker of Italian and Cuban descent has been in more movies and television than most think.
The 44-year-old actor looks to diversify his resume, and has starred in everything from Boardwalk Empire to Annie.

He told Vulture about his career plans:

Let’s learn about the actor who is in a relationship with a Neighbors star.

1. He Called Rose Byrne the ‘Love of His Life’

In the video above, when he accepted his Emmy for his work on Boardwalk Empire, he thanked, “the love of my life, Rose.”

Most recently, the couple acted together in the remake of Annie.

Byrne admitted that she had some trepidation about sharing a project with her beau:

I was initially nervous. Clearly, it could have not been a good idea, but it was very fun to have a really great friend on set. It was nice to share our day.

Cannavale, who doesn’t speak about his love life in interviews, told Rolling Stone what attracted him to the part in Annie:

I’ve always wanted to do a musical. I’d been rehearsing this big dance scene with Cameron Diaz since September and we finally shot it a couple weeks ago. Every film I try to do something that I’ve never done before. It’s tough in this business, you know? People see you do something they like and then they just want to see you do it over and over again. That’s why I did this movie.

The actor became a dad at a young age, and has a son, Jake, with Jenny Lumet.

“We met in July, got married in December and had Jake in May. He was born two days before my 25th birthday,” he told the Times.

The father-son duo actually shared the screen on Nurse Jackie. He told Vulture about the unique experience:

You never actually expect to ever work with your kid, and I love being around him, so it was just another facet of our relationship. We got to experience another great bonding moment. It was really kismet.

In an interview with Broadway.com, he admitted to never thinking he would settle down or raise a family. That all changed when Jake was born, and he began making career choices with his son in mind:

I thought I was going to be a gypsy actor, traveling all over the world playing the great roles. I ended up having a kid very young, and it put things in perspective. He became the most important person in my life, and everything else seemed to fall into place. I’ve made decisions that perhaps have not let me go as far in my career, but I’m totally fine with that because it’s kept me close to my son.

3. He Won an Emmy for Playing Will’s Boyfriend on ‘Will and Grace’

He played Vince, the cop boyfriend of Eric McCormack’s Will, until the final episode of the series in May of 2006.

The New York Times praised his performance, saying, “His scene with Eric McCormack, asking him to move in, had a dignity rare in sitcoms.”

This is the best photo of Paul Rudd & Bobby Cannavale holding hands you will ever see. http://t.co/jekgsLoT20 pic.twitter.com/3Hr6eCYayb

Actor Paul Rudd organized a poker crew, and Cannavale is part of the group.

The poker group is [Joe] Lo Truglio, [Bobby] Cannavale, Dallas Roberts. Richard Kind will play cards a fair amount. We play in a bar, which is probably illegal. Over Super Bowl weekend there were 14 dudes at my house upstate. What a mess. It was a bunch of middle-aged dudes, ranging in age from 30 to 50. It was like, When is the last time a bunch of dudes got together for a weekend? I felt like I was in Love! Valour! Compassion! It was totally fun.

In an interview, Rudd named Cannavale, Lo Truglio and Peter Dinklage amongst his karaoke family.

“We’ve all ‘raoked together over the years. We rent rooms. It isn’t like we’re going to a bar. So it’s like four guys sitting around singing,” he said.

5. He Talks to Himself on the Streets of New York

A New York resident, he admits to chatting away with himself to practice lines. 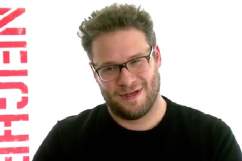