Iggy Azalea appeared on Dancing With The Stars tonight to perform her song “Fancy” and she had a malfunction with her earpiece. In the very beginning of her performance, she actually stopped and said there was a problem, which made things quite awkward. But, it is live TV and the performers continued the rest of the set. 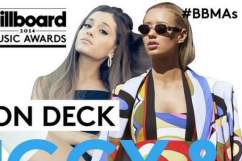