Are You Here opens on August 22 in theaters but until then this trailer is going to have to do. In the movie, Ben (Zach Galifianakis) travels home with his friend Steve (Owen Wilson) after the death of Ben’s dad. Hmmm, where have I heard this before?

The movies comes to you from Mad Men creator Matthew Weiner, so it’s reasonable to have high expectations. Judging by the trailer, it won’t be 113 minutes of dick-jokes but maybe something a bit deeper. Amy Poehler also stars as Terry, Ben’s sister who is aggrieved at the money being left to her dim-witted brother.

The movie made its debut at the Toronto Film Festival back in September 2013. 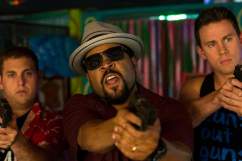 Ice Cube as the Captain on ‘Jump Street’: 5 Fast Facts You Need to Know