Chelsea Chapman Kirwan is making headlines as news of an alleged affair with Robert F. Kennedy Jr. emerges. Read on for the facts on Kirwan and the reported affair. 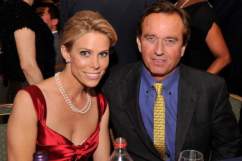 According to Daily Mail, Hines and RFK are just weeks away from tying the knot. Unfortunately, this news may alter their plans if it’s proven to be true.

Robert F Kennedy Junior had an affair with the wife of plastic surgeon to the stars Laurence Kirwan behind the back of his fiancée Cheryl Hines, it is claimed today.

2. Kirwan Is the Estranged Wife of Plastic Surgeon Laurence Kirwan

Professor Laurence Kirwan is the estranged husband to Chelsea, who is a plastic surgeon to the stars, with offices in New York, London, and Connecticut. The two actually met when Chelsea was his patient. A source close to the professor told Daily Mail that he was aware that his wife and RJK were friends and carried on phone calls before their split.

3. RJK and Kirwan’s Relationship Will Be Publicized in Kirwan’s Divorce

As part of the ongoing court fight between Chelsea and her husband, the relationship she had with RJK will reportedly be brought up next month on July 22, 2014, in Kirwan’s divorce battle.

It is believed a friendship started well before the Kirwans separated on July 4, 2012 – and a source reveals how Chelsea’s cell phone records show she was speaking to RFK Jr five times a day in August 2012. The exact nature of Chelsea’s relationship with RFK Jr could well come out in court next month when Prof Kirwan will appeal to try and modify the protection order currently in place over his visitation rights with his three children with Chelsea, 42.

4. Kirwan Previously Had her Husband Arrested for Assault

In August 2012, Chelsea Kirwan called the police and her husband was charged with third degree assault and disorderly conduct after an altercation at their home. The Original Greenwich Diva writes:

Officers responding to a domestic dispute called at the doctor’s Backcountry mansion found his forty-year-old wife, Chelsea Chapman Kirwan, and her 18-year-old daughter, Tailor Dortona, suffering from minor injuries. Chapman-Kirwan told officers her 60-year-old estranged husband had attacked her and her daughter from a previous relationship, inside their Sterling Road home.

Professor Laurence Kirwan was then ordered to stay away from his wife.

5. One Source Claims Kirwan Simply Had a Crush on RJK

According to a source, Chelsea Kirwan met RJK at the gym. Daily Mail reports the source as saying:

She didn’t say they were having an affair, but she was obviously infatuated. RFK Jr gave her his book which she was reading, she was very impressed by him.

Read More
Celebrities
Chelsea Chapman Kirwan is reported to have had an affair with Robert J. Kennedy Jr. Read on for the facts.