Beloved TV couple Cory Matthews and Topanga Lawrence (now Matthews) return to the small screen as parents in new show Girl Meets World. We fell in love with Cory and Topanga when they starred in Boy Meets World, but we’ve continued to hold onto that love years after the show’s ending. We re-live our favorite moments through re-runs and memories. Now, let’s take a look back at why Cory & Topanga forever live in our hearts. 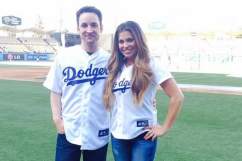 In episode 4 of the show Boy Meets World, Cory and Topanga shared their first on-screen kiss. It was apparently the first real kiss for Ben Savage (Cory) and Danielle Fishel (Topanga) as well. Throughout the beginning of the series, Cory didn’t know quite how to feel about Topanga because she was going through a hippie-esque stage and was pretty “out there.” Have a look at the couple’s first kiss in the above video.

Danielle Fishel opened up to 411 Mania about how she felt on the day of her first kiss with Savage:

I was very nervous that day. We had an entire week of rehearsal ahead of time. With that said, Ben and I were not really kissing all that week. We were mostly skimming over that scene. On the day of taping, Ben and I were very nervous. Also, both of our families were there! Our grandparents were there as well. It was a little nerve racking to have your first kiss in front of that many people and an audience. I was very nervous and I was afraid that Ben was not going to be nervous at all. Honestly, I think he was more nervous than I was! He was literally shaking … That was a really funny experience. It’s also one of the best memories of my life.

2. Originally, Topanga Had a Crush on Cory’s Brother

The first Matthews boy that Topanga Lawrence had a crush on was actually Cory’s older brother Eric. Check out the above clip as Eric has to let young Topanga down. In addition to Cory’s brother, Topanga once shared a moment with Cory’s best friend Shawn. Check out that scene in the below clip where Topanga and Shawn have to make out in a commercial:

Aside from the above “commercial scene”, Topanga and Shawn did once date on the show when Cory was too scared to ask out Topanga. They also get a little too close in their friendship at times.

a long walk to Pittsburg the Shawn and Topanga friendship is just !!!!!!!!!!! pic.twitter.com/RQ7RE4ENSj

3. Cory Once Cheated on Topanga

A girl named Lauren comes between Cory and Topanga on a night at a lodge when Cory gets kissed. Then, Lauren writes Cory a letter about her feelings and Topanga tells Cory to see her so he can decide his own feelings. This backfires on Cory. Though he realized his true love is Topanga, Topanga dumps Cory because he felt he needed to test their love. Have a look at Cory’s kiss with Lauren in the above clip … and his break up with Topanga in the below video.

4. Topanga Proposed to Cory at Their High School Graduation

Topanga was accepted to Yale University, but didn’t want to leave Cory if they truly were meant to be together. At their graduation ceremony, Topanga musters up the courage to ask Cory to marry her and he accepts. Have a look at the memorable scene in the above clip.

And, just for fun, let’s watch Cory’s brother Eric make a fool of himself as he sings to beloved Mr. Feeny at Cory’s graduation.

5. They Broke Up Three Times

Cory and Topanga broke up three times and it was usually Topanga who pulled the trigger. Topanga was first afraid of love. When Cory told her his true feelings, she got scared off. Topanga was also influenced by her parents’ divorce, claiming that no love could last forever. Poor Cory was left heart-broken. Despite all their break ups, the two finally tied the knot. Though marrying so young came with a great deal of ups and downs, the two powered through it all. Check out their wedding in the above video clip. 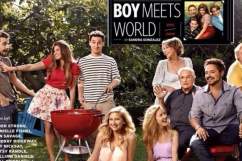