And the winner of Outstanding Lead Actress in a Comedy Series for the 2014 Emmy Awards is … Julia Louis-Dreyfus.

The nominees in this category include Lena Dunham in Girls, Melissa McCarthy for Mike & Molly, Edie Falco for Nurse Jackie, Taylor Schilling in Orange Is The New Black, Amy Poehler from Parks and Recreation, and Julia Louis-Dreyfus in Veep.

On her way up to the stage, Dreyfus had a makeout moment with Bryan Cranston, that was interrupted by presenter Jimmy Fallon. 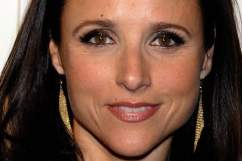