Sara Bareilles is using her beautiful vocals at tonight’s 2014 Emmy Awards to pay tribute for the “In Memoriam” segment.

Here’s what you should know about the gifted singer and why this performance means so much to her.

1. Bareilles Dedicated a Song to Williams on Her Tour

When Robin Williams passed away, Bareilles posted the above Aladdin photo on her Instagram with this caption:

What a tragic loss. So desperately sad to lose someone who made so many so happy.

In addition, the night of Williams’ death, Bareilles was performing on her Little Black Dress tour in Los Angeles and dedicated her song “Hercules” to the late comedian. The song is from Bareilles’ very personal album The Blessed Unrest, and her connection to Williams is that she too has suffered with depression, according to The Hollywood Reporter. 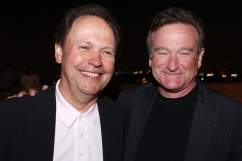 According to the Daily News, Bareilles is being sued by artist Maya Hayuk. The Daily News writes:

Maya Hayuk, 44, says Bareilles and her record company used her mural ‘Chem Trails NYC’ as a backdrop for numerous promotional pictures and videos of the pop star without Hayuk’s knowledge or permission.

Bareilles reportedly posed for photos in front of Hayuk’s mural and the pics were used to promote her album “The Blessed Unrest.” The lawsuit seeks $150,000 in damages.

3. Bareilles Was a Celebrity Judge on Sing-Off

For the third season of the singing competition Sing-Off, Bareilles acted as judge alongside Ben Folds and Shawn Stockman. Have a look at Bareilles teaming up with fellow judge Ben Folds for a holiday performance in the above video.

Shortly after joining The Sing-Off, Bareilles announced she was in the process of recording a new EP with fellow judge Ben Folds producing it.

4. Carole King Did a Duet With Her at the Grammys

In January 2014 at the Grammy Awards, the life and career of Carole King was celebrated. Bareilles actually performed a duet with King at the awards in honor of the big event. The two performed renditions of King’s “Beautiful” and Bareilles’ “Brave”.

5. She Has a Huge Philanthropic Side

Bareilles gives back by participating in many charity events and helping those in need. A Trace of Sun is a documentary of when she was volunteering in Japan after the 2011 Tohoku earthquake. In addition to this, she performs at many charitable events. For example, this past April, Bareilles performed with Elton John at The Breast Cancer Research Foundation Annual Hot Pink Party Fundraiser. 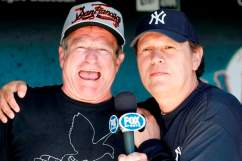