Usher is set to perform at the 2014 VMAs and he’s revealed that he’s going to try something he’s never done before. The details are under wraps, but he did say:

All I wanted to give my fans is the UR experience … Everybody, all of the executives, all of my creative people and team, they’ve been on-board and the VMAs really did give me an opportunity to paint an incredible picture. But it is expansive, it does feel like nothing I’ve done before.

Usher says he’s not trying to outdo his last VMA performance or any other artist. He just wants to give it his best shot. “I never approached this show — others yeah, but not this show, that I should go out here and try to beat someone else,” he said. “I just feel like I need to go out here and give it my all and enjoy it.”

So, what do you think Usher has up his sexy sleeves for the night? 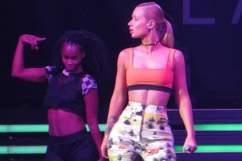