Couples Therapy on VH1 begins tonight and former Bachelor star Juan Pablo Galavis is on the show with his girlfriend Nikki Ferrell.

1. Juan Pablo and Nikki Were the Last Couple to Be Announced on the Couples Therapy Cast

2. Communication Is Their Number One Problem

While distance is a problem in their relationship, Juan Pablo living in Miami and Nikki living in Kansas City, communication is the real killer for them. Juan Pablo revealed to Fashion N Style:

3. On The Bachelor, Communication Was Juan Pablo’s Biggest Problem As Well 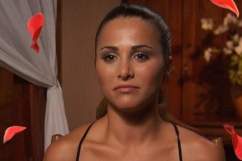 When Juan Pablo was on The Bachelor, a big issue many of the ladies, as well as viewers, had with Juan Pablo was his failure to communicate. So, it seems that this is a pattern of behavior for him. You may remember Andi Dorfman flipping out that if he said “Eees okay” one more time, she would lose it. Juan Pablo didn’t give much of himself or his feelings to the women he was dating on the show, which made things very difficult for them. Even on the “After the Rose” special, Juan Pablo couldn’t give people what they wanted, he couldn’t seem to communicate his feelings. Hopefully, Couples Therapy can help him with that.

4. Nikki Doesn’t Expect Juan Pablo to Say “I Love You” Back

When Nikki was on The Bachelor, she told star Juan Pablo that she loved him, and he never said it back. Viewers were waiting and waiting for Juan Pablo to say those three little words, but he refused. Nikki says she still tells him she loves him and she doesn’t seem to care that he won’t say it back, telling Fashion N Style:

Just because he hasn’t said it to me, doesn’t mean that I don’t say it to him. I don’t expect him to say it back when I say it. Maybe one day, he will. In all reality, we haven’t been together too long. But he does; he loves me. he’s committed to this.

5. Juan Pablo Needs Help Explaining His Relationship With Nikki to His Daughter

Juan Pablo Galavis is a single father to young daughter Camila. He struggles with what he should be telling his daughter about his relationship with girlfriend Nikki. The Inquisitr writes:

Galavis says that he needed some help in figuring out how to explain his relationship with Nikki to his daughter Camila, and they have had some challenges in maintaining a long-distance relationship.

Just a month ago, Galavis was telling People that Nikki is a wonderful woman who treats is daughter amazingly well. So, we’re curious to hear more about this subject with such conflicting stories.