The premiere of Sons of Anarchy tonight was filled with craziness, gore, lies, and bloodshed. Read on for the Top 5 spoilers …

1. Jax Gets Let Out of Jail With Revenge as his Focus

The episode begins with Jax in jail after Tara’s death, but the District Attorney lets him out of jail since she’s unable to tie him to Tara’s murder. The only person Jax feels he can trust is his mother, aside from the club. Jax is determined to avenge Tara’s death and bloodshed ensues.

Gemma does not reveal to Jax that she’s killed Tara. She’s determined to keep her family together at any costs and she’s more evil than ever, though she seems somewhat remorseful for her actions.

3. Juice Is in Hiding

Juice is hiding out at Wendy’s apartment until Gemma can get him enough money to get out of town. Unser begins to do a little digging and discovers Juice at Wendy’s place. Juice surprises Unser with a gun to his head. The episode ends with Juice guarding a tied up Unser.

Jax kills a man in jail and carves a swastika on his body to get in good with Ron Tully, played by Marilyn Manson. Tully is a big wig in prison and Jax is looking to expand his power.

5. Gemma Convinces Jax that an Innocent Man Killed His Wife

In order to further cover up her murder of Tara, Gemma implicates an innocent Asian man in Tara’s death. With the help of the gang, Jax tortures him to death in an insanely gruesome way, finishing him off by stabbing him in the skull. 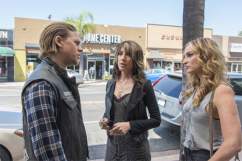