My robe becomes my pillow on show days. Thank u to all of our #TeamJoker fans in advance for ur support. Feeling blessed to be on this show. #dwts @allisonholker @dancingabc

Jonathan Bennett is a contestant on Dancing With the Stars, most known for his role as dreamy Aaron Samuels in the movie Mean Girls. One thing that Jonathan has talked about on the show is his entire reason for competing on the show – his father. Jonathan’s dad died this past spring and Dancing With the Stars was his favorite show. Two months after his dad’s passing, Jonathan signed on to be a contestant. His father was Dr. David Bennett, a physician in Toledo, Ohio, who died from brain cancer on April 28, 2014 at the age of 74. His mother Ruthanne, died on November 30, 2012, at the age of 67. Jonathan Bennett told the Toledo Blade newspaper about his dad’s love for DWTS:

This was his favorite show on television, and when he was sick in hospice the only show he wanted to watch was Dancing with the Stars because he said this show made him feel good. So I’m doing this performance not just for myself but for my father because I know how badly he loved the show and how thrilled he would be that I’m on it. I’m also doing this dance for my mother because she passed away a year before that and they both were huge fans of the show.

Fortunately, Jonathan has three other siblings to lean on – two brothers and one sister named Brian, Brent, and Lisa Bennett.

For more information on Bennett, his dad, and Aaron Samuels, check out the below links: 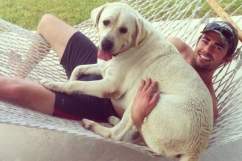 Jonathan Bennett, ‘Dancing With The Stars’: 5 Fast Facts You Need to Know 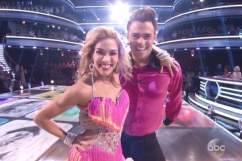 Jonathan Bennett Eliminated on ‘Dancing With The Stars’