No fear of heights here! Time to go eattttt!!

Jonathan Cheban is the longtime BFF of Kim Kardashian. We’ve seen him over the years on each one of her reality shows and we’ve grown to love him as our own BFF. But, Cheban isn’t just Kim K’s right-hand bud. He’s a successful business man and entrepreneur. He is also a restaurant owner with Sushi MiKasa, Sushi Couture in Miami and his franchise Burger Bandit. Cheban also launched a clothing line called Kritik and a jewelry line called RichRocks. He also came up with Glam Screen, an HD mirror, and is partner in the site EliteDaily.com. You can check out more about his ventures on his website TheDishh.com. In addition to having Kim as a close friend, he also is quite close with Mama Kris, aka Kris Jenner. Read on for the facts on Cheban and his ups and downs with the Kardashian girls.

1. The Kardashians Accuse Cheban of Leaking Stories to the Media

On Kourtney and Khloe Take The Hamptons, the Kardashian sisters believe that Jonathan has leaked stories about them to the press. Over the years, there have been many times when their secrets and personal details of their lives have been leaked, so they are trying to find the culprit. Kourtney even makes jokes about Jonathan calling paparazzi to come take his photo when he’s out with Kim. On Kourtney and Khloe Take The Hamptons, Kim says that Jonathan was the only person she told about sister Kourtney seeing a therapist and the story ends up in the press. So, Kim accuses Jonathan of being a snitch.

This isn’t the first time that Cheban has been accused of exploiting Kim. When he was writing a book, Kim and mother Kris Jenner thought that Cheban was using Kim in the book without her permission. The two had a big blowout fight and then Kim found out that the book wasn’t about her at all. It did however, talk about how Kim was the “it girl” of Hollywood and Cheban spoke very highly of his BFF in the beginning of the book. Kim felt silly and apologized, writing a beautiful recommendation for Cheban to put in his book.

2. Cheban Had His Own Show The Spin Crowd, Produced By BFF Kim

Incredible trip to Dubai..long trip home in this mini bedroom. Emirates Airlines is perfection and the staff!! Hello NYC

Jonathan Cheban and former business partner Simon Huck had their own reality show called The Spin Crowd, which was executive-produced by Kim Kardashian. Cheban’s hoped to show viewers how the media-saturated world around them actually works. He stated:

I’ve seen shows about funeral homes, bounty hunters, hospitals, cops and fishermen, and they’ve all been given the opportunity to give insight on their jobs and the reality of their careers. Why not tell the story of what people care most about—the magazines, websites and press they surround themselves with every day?

Unfortunately, the show was canceled after one season because of poor ratings, though it was very entertaining.

3. He Had a Falling Out With His PR Partner

Cheban started out his PR company working for celebrity publicist Peggy Siegel. After much success, Cheban formed his own company in 2001, CommandPR, and has accumulated a net worth of $3 million since then. Cheban is now the former CEO of the company, which is a full-service public relations firm with offices in New York City, Los Angeles, and Miami. In 2010, Cheban took on fellow publicist Simon Huck as a partner in the firm and we watched the two on Keeping Up With the Kardashians for years. As of March 2013, however, it was reported that Cheban and Huck parted ways, with Huck buying out Cheban’s share of the company. Cheban remains a consultant to the firm.

Despite his split with Cheban, Simon Huck is still good friends with the Kardashians and Jenners. And, it looks like Cheban and Huck are on civil terms. Check out the below Instagram photo from October 2014.

4. His Sexuality Has Been Plagued By Speculation And Rumors

I woke up like this…literally! From a nap! And sorry I don't do drugs. I'm not a trash bag for those morons commenting that. Dumb fucks

Viewers are always asking about Cheban’s sexuality, whether he’s straight or gay. Even Kim Kardashian had an episode on her reality show where she was asking Cheban about it. We’ve never really gotten a solid answer, but he did appear on Millionaire Matchmaker with Patti Stanger in search of love with a woman who had Jennifer Aniston’s looks and Kim’s curves. He had a great time with one girl, but nothing big came of it.

The only relationship that has been reported is a girlfriend named Anat Popovsky, who is a stylist that he met in 2012. In April 2014, it was reported that the two had broken up.

5. Cheban’s Life Was Saved From a Knife-Wielding Stalker

On November 25, 2014, Cheban posted the above photo with this caption:

JUSTICE prevailed today. 5 months ago my friend Sal @salthecontractor was protecting me from a stalker on drugs and a knife and punched him. Sal was later arrested for protecting me and charged with a felony! Two months later the stalker tried to stab two NYPD cops and was shot dead! Today Sal still had to goto court! The case was Dismissed!!! I want to thank Sal’s attorney Igor Vaysberg. I do feel sorry for the victims family. God Bless!

A source close to the reality star explains to Us Weekly that, while Cheban was dining with three friends and a security guard, “a man entered the restaurant with a pocket knife hanging from his belt and screamed ‘Cheban! Cheban!’ He was kept from the group’s table, but stuck around the restaurant and continued to yell at Jonathan then he saw them get up. When Jonathan and his friends left, the stranger tried to attack him,” the source continues. “In retaliation, his security guard punched the guy in the face and got Jonathan safely out of there.”

This isn’t the first time that Cheban was physically attacked. In 2011, a Kris Humphries fan flour-bombed Cheban, yelling, “This is for Kris Humphries.” Humphries was married to Cheban’s BFF for just a few months until Kardashian called off the marriage and Humphries was not portrayed well on her reality show. 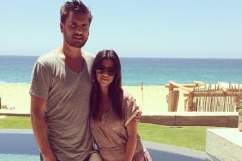