Just picked up my hot date for the #ScenicRoute #Premiere. I hope she puts out…

Fergie and Josh Duhamel are one of the sexiest couples in Hollywood, but before Josh because Mr. Fergie, he was famous for his own career as an actor as well as serious heartthrob. Josh Duhamel is very supportive of Fergie’s career and now Fergie has made her comeback after eight years, returning with new song “L.A. Love.” When Fergie was filming her comeback music video, Josh even showed up on set with their son to show their support. Josh Duhamel is just a cool, laid-back guy with a killer smile. Meeting him, you would never know that he’s a rich, successful movie star because he’s so nice and so down-to-earth. Read on for the facts on Josh Duhamel, his relationship with Fergie, and more.

1. A Few Years Ago Josh Was Caught Up in a Cheating Scandal

In 2009, a stripper named Nicole Forrester claimed she had sex with Josh Duhamel. The allegations rocked Josh’s relationship with Fergie. Three years later, Fergie finally opened up about the cheating scandal to Oprah Winfrey, saying:

It was difficult. When you go through difficult times it really makes you stronger as a unit. As a partnership. It does for us anyways. Our love today is a deeper love.

Have a look at Nicole Forrester’s take on the cheating scandal in the above video.

2. His Love for Fergie Started With a Music Video

In an interview with Anderson Cooper, Josh Duhamel revealed the infatuation he had with Fergie. He was hanging out with Molly Sim’s boyfriend at the time and they watched the “Hey Mama” by Black Eyed Peas music video she was in. At that moment, it was all over for Josh. He was on the show Las Vegas at the time and even got the show to have the band come on an episode.

3. Ashton Kutcher Lost to Josh In a Male Model of the Year in an International Modeling and Talent Association

Josh Duhamel got his start as a fashion model and even won the Male Model of the Year in an International Modeling and Talent Association in 1997. The runner-up in the competition was Ashton Kutcher. Josh moved on from modeling to music videos like Donna Summer’s “I Will Go With You (Con te partirò)” and Christina Aguilera’s “Genie in A Bottle”. Finally, he began to get acting gigs.

4. He Owns a Restaurant In North Dakota

Really need to work on my table manners. Texting at the table is just plain rude.

Josh Duhamel was born in Minot, North Dakota, so that’s the reason he opened up a restaurant there. In 2005, Josh became the co-owner of 10 North Main, which is a restaurant, which features lobster and pheasant menu items, among other things.

5. Fergie And Josh Are Both Religious

Both Fergie and Josh are catholic and attend church. In turn, their weddin had a Roman Catholic ceremony at the Church Estate Vineyards in Malibu, California on January 10, 2009. As far as the other details from the big day, Us Weekly writes:

Fergie and Josh exchanged H.Stern rings, with each band engraved with special personal messages by the bride and groom. Her engagement ring had a round, 4-carat brilliant cut diamond set amid other diamonds, with colors ranging from white to cognac. A narrow, colored diamond wedding band was designed to match. Duhamel’s ring was made of 18K white gold with a brush finish. 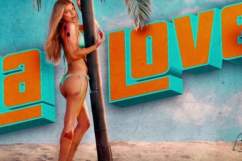