WOW! Just…WOW! The biggest shocker of an announcement came during UFC 181 – former WWE Superstar CM Punk has decided to take his talents to the Octagon. The man known in real life as Phil Brooks will now take his combat training and skills into the world of the UFC in 2015. Here’s everything you need to know about this bombshell of an announcement.

1. CM Punk Announced His Move to the UFC During a Live Interview Segment with Joe Rogan

During the live PPV airing of UFC 181, Joe Rogan shocked the live crowd and paying audience at home when he began interviewing CM Punk. Punk told the world that he is now an official member of the Ultimate Fighting Championship roster. Here’s a bit of what Punk had to say in regards to his major move from wrestling into professional MMA:

This is my new career, 100-percent. I’m going to go full steam ahead, all systems go after today, and it’s going to be fun.

CM Punk dropped some more comments during the post-fight press conference for UFC 181 in the video interview seen below:

2. Punk May Fight at the Middleweight Class

When asked about which weight class he’d compete at, Punk noted that he’d be testing his weight out and looking to fight at the Middleweight class (185-pounds). Punk also went on to state that he’d be willing to fight at 170-pounds as well. CM Punk now joins the short list of professional wrestlers who decided to join the MMA fray – Brock Lesnar, Bobby Lashley and Dave Bautista.

3. Punk Has Been Training in Two Different MMA Disciplines for a While Now

For years now, Punk has been training in jiu-jitsu and kempo for quite some time now. Punk actually trained with a member of the famous Gracie family (Rener Gracie) in jiu-jitsu. During an interview with MMAFighting.com before UFC 181, Rener speculated on the chances of Punk entering the UFC:

CM Punk is a very unique individual in that he obsesses with things very easily and when he commits and he obsesses with something he goes for it 100 percent. Like we’ve seen over the years with his success in the WWE, when he applies himself he finds a way to make it work. In MMA? I don’t know — I’ve only been working jiu-jitsu with him, and he’s still very new to jiu-jitsu.

UFC boss Dana White actually had a closed door meeting with Punk before UFC 181. In an interview with ESPN.com, Dana offered up a few comments regarding his newest acquisition for the MMA company:

He wanted to fight here. He wanted to give it a shot, so we gave him an opportunity. It’s not like Brock Lesnar. We’re not going to throw the kitchen sink at him. Lesnar had a wrestling background. (CM Punk) going to fight a guy who is 1-0, 1-1, 2-1 — something like that.

5. Punk Recently Broke His Silence About His Departure from the WWE

CM Punk has certainly been in the news a lot lately. He broke the internet during his 1st post-WWE interview as he spoke to his close friend Colt Cabana for his "Art of Wrestling" podcast. A week later, he appeared on that very same podcast to offer fans some more info on his life since leaving the WWE. Check out the two links below to hear both interview segments. And make sure you check out the video interview above where Punk talks about the moment he decided he wanted to enter the UFC. 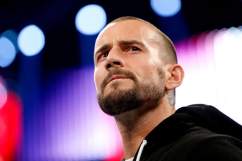 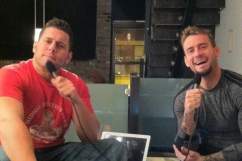