thanks so much @bostoncommag for putting me on your cover!http://bostoncommon-magazine.com/personalities/articles/harry-connick-jr-talks-american-idol-judge

Harry Connick Jr. brings a fun flavor to American Idol, even though the contestants may fear him as a judge. He’s a country icon and successful actor, who has amassed a net worth of $35 million in his career. He juggles music, fatherhood, marriage, and many projects, yet always seems as cool as can be. Read on for everything you need to know about Connick, his wife, his family, his background, and what you can expect to see from him on American Idol.

Last January, Harry Connick Jr. decided to take a break from judging and auditioned for American Idol. He was very nervous and got really excited when Keith Urban autographed his ankle rather than giving him a ticket to Hollywood. Check it out in the above video.

happy new year from me and jilly!!! we love you!!! #happynewyear

Jill Goodacre is a former Victoria’s Secret model and mother to Connick’s three daughters. The two married in 1994 and currently live together in New Canaan, Connecticut. For all the info on Goodacre, check out the below link:

3. He’s the Comedian Of The Judges On American Idol

Harry Connick Jr. may be serious when it comes to his critiques of the contestants, but he’s a silly and goofy guy who likes to have fun. Last season, Connick stole host Ryan Seacrest’s shoe during a live show, leaving Seacrest half barefoot on stage. He also cradled a contestant in his arms during the contestant’s audition and put a young girl on his shoulders in the crowd during his judging. What’s Connick going to be up to this season? The above video clip from the 2015 season gives you a little taste of what he has in store. 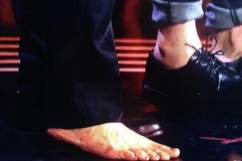 4. His Heart Is In New Orleans

Harry Connick Jr. is a humanitarian, who has a lot of passion for his hometown New Orleans. According to the New Orleans Times:

Connick was on the ground in New Orleans days after Hurricane Katrina, and was among the city’s most visible and vocal advocates. He, his saxophonist buddy Branford Marsalis, and their manager, Ann Marie Wilkins, partnered with Habitat for Humanity to develop the Musicians’ Village, a community of dozens of affordable homes for musicians and others in the city’s upper Ninth Ward. Connick remains heavily involved with the Village. On Feb. 4, he joined Marsalis for a luncheon/concert at the Civic Theatre in New Orleans to raise money for the Ellis Marsalis Center for Music.

This may explain why Connick usually appears down there for Mardi Gras, riding in Orpheus, the huge parade he co-founded in 1993. .

Connick comes from a family of attorneys, so we can only imagine what they thought when he said he wanted to have a career in entertainment. The New Orleans Times writes:

His father, Harry Connick Sr., spent 30 years as the District Attorney of Orleans Parish (he’s also an amateur crooner). And Harry Jr. typically dedicates his albums to his late mother, Anita, an attorney and city court judge who died of cancer in 1981. One of his first cousins, Paul Connick, is currently the District Attorney of Jefferson Parish.

i spelled out @Letterman's name in vegetables.

Harry Connick Jr. has had a successful career as an actor, starring in movies alongside big actors like Sandra Bullock and Hilary Swank. He also had a long-standing role on the show Will & Grace as lead character Grace Adler’s husband. He was a Jewish doctor who won viewers over until he cheated on Adler and they broke up. Even after that, Connick’s charm won viewers over and he returned to win back the heart of Adler.