John Legend and Common gave a powerful performance at the 2015 Oscars with their song “Glory” from the movie Selma. Backed by men and women of all races, marching behind them, with a slide show of historical photos in the background, the two stars easily gave the most epic performance of the night. It provoked tears from stars including Chris Pine and David Oyelowo and received a standing ovation from the audience.

Directly after their performance, the duo won for Best Original Song. 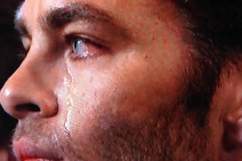