Nia Gonzalez is being reported to be Chris Brown’s babymama. She’s a Houston-native who also goes by Nia Amey and has known Brown for a few years. Earlier reports had indicated that Nia Riley, star of VH1’s Love & Hip Hop, was Brown’s baby mama. She has a daughter with rapper Soulja Boy.

Brown and his babymama’s daughter is 9-months old, reports TMZ. The couple have known each other for quite awhile and are still on good terms but they’re not together. “Sources” told TMZ that Brown is “happy about being a father.” The site adds that it doesn’t look as if there is a “formal child support order in place.”

2. A Man Claimed on Instagram That He Was Gonzalez’s Baby’s Father

As reports about Brown fathering Gonzalez’s baby emerged, a man going by “@Royalty_Yaye_Bah,” posted on Instagram, “The Saddest Day of My Life This lil girl meant the world To Me I been There Through Everything I was told This Was My child How Can This Be happening A Man Just Steps in and Take Over What I Built What I lived for I Dedicated My Whole Life To This Family Now Everything Is Gone..Y Did this happen To Me Now I lost My Lil Girl For Good?” The man later deleted the post. His Instagram page was full of pictures of him with Nia and her baby. Media Take Out reports in what they call an “exclusive” that Nia had been raising the baby with the other man.

3. She Has a High School Age Daughter

A friend of Nia’s ex told Heavy.com that she has a high school age daughter with a man named Terry Amey, who our source tells us is “baller” who is known by everybody in Corpus Christi. Amey is Nia’s married name. Nia’s daughter lives with Terry in Corpus Christi. The source added that Nia was a “high maintenance gold digging chick that, because Terry has much power, got everything that she wanted. He spoiled her.” Terry Amey is in his late 40s. He restores classic cars. In 2011, an article stated that he had bought a 1991 Cadillac Brougham for his daughter. Online records show that Terry Amey and Nia Amey were in divorce court in Nueces County in 2014.

4. Nia Is a Music Video Vixen

You can watch her oozing sex appeal in Phil Wade’s “Dreams of You” video above.

She’s also been referred to as an Instagram model, going by the handle “@NIA_______” Above you can see a screenshot of her now deleted Instagram homepage. On her Model Mayhem profile, she says she’s a nursing student and a “very outgoing person.” She adds that she has a passion for photography.

Nia can be seen making the kissy face in the black top, Karrueche has arm around Brown’s babymama. (Instagram)

According to an Instagram post from Brown’s most recent girlfriend Karrueche Tran, the two were at a Las Vegas party together back in May 2013. On his Instagram page, Chris Brown posted pics from the same party.

Listen. One can only take so much. The best of luck to Chris and his family. No baby drama for me. ?

As news of Brown’s fatherhood broke, Tran tweeted the above message, all but confirmed that Chris is a dad. Brown had been linked to Tran for four years. The couple appeared at New York’s Fashion Week in February but more recently, they seemed to be on the outs with Brown accusing her of “going on dates” with his eternal rival Drake.

5. She’s a Friend of Christina Milian’s

Hip Hollywood reports that Nia is a friend of singer Christina Milian’s and is signed to her ex-fiance’s, Jas Prince’s, record label, Y.E.M.G. Prince and Nia appeared in an Instagram pic together over Christmas. On the day that the Chris Brown story broke, Milian tweeted the above. 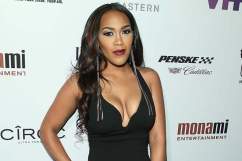