Brandon Routh is best known for playing the Man of Steel, and has recently taken on another superhero as Atom on Arrow. He’s embracing his new character, even if he could have never dreamed he would be once more suiting up to play a comic book character.

I hadn’t conceived of this opportunity, an opportunity to play another superhero…I could’ve looked at it and thought, well, I played the coolest superhero ever. What have I got left to prove or do?…But thankfully I wasn’t in that mindset.

Now that we know he is multifaceted, let’s learn more about the highlights in the 35-year-old actor’s career and personal life.

Routh joined the show in Season 3. When he was cast, he didn’t know much about the character of Atom.

He told Superhero Hype that to prepare, he started reading the comics:

Deadline reported that The CW is planning a spinoff from Arrow and The Flash, where Routh would be starring alongside Victor Garber, Wentworth Miller and Caity Lotz.

He starred in 2006’s Superman Returns, which made $400 million in the global box office.

He told MTV, ” After the movie came out, yeah. It was well reviewed and well-liked, and about a year after it, they started to be down on it. 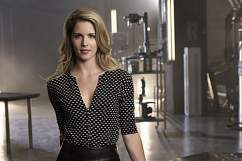 Routh used to work at Lucky Strike and that is where he met his future wife, who is known for her roles on True Blood, Parenthood and Revenge. “I was a bartender. And her brother was having his [wedding] rehearsal dinner party there,” he told People. Ford added, “He met my whole family the day he met me.”

Ford told In Style about how she found a way to talk to him for longer. “I kept asking him for another drink, telling him the one before was too strong,” she said.

In the clip above, Ron Routh, Brandon’s dad, takes a reporter from the Des Moines Register on a tour of the room at his home in Norwalk, Iowa, dedicated to his son’s Superman role.

The actor does go back to visit his home state. In 2010, The Register reported that he was back to visit his sister, singer-songwriter Sara Routh.
The paper also detailed Routh’s routine when he returns to his roots:

When visiting, he frequents Iowa football games, “splurges” on Culver’s custard and enjoys breakfast at Cracker Barrel, where he orders the chicken-fried chicken.

On his personal website, he has a blog where he answers inquiries from fans.

In the video above, he apologizes to fans about his inability to be at Emerald City Comicon 2015.