John Connor has been led to believe that he would be the one to save the world after Skynet’s destructive efforts against humanity. His mother, Sarah Conner fought for her and her son’s future in past films in the Terminator series.

With the upcoming Terminator: Genisys though, the timeline has changed. A Terminator has been sent back to the time before the war between humans and robots. This killer robot’s target? Sarah Connor. Kyle Reese is sent back in time to prevent that from happening. We’re excited about the possibility of what could happen in this film and how it could impact the future of the franchise. The 2nd official trailer has hit the web and it’s full of some awesome reveals.

Terminator: Genisys slams into theaters on July 1, 2015. Enjoy…and of course, “we’ll be back.” 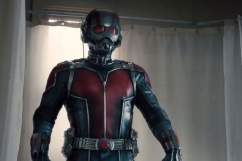