Beware! Don’t stare at the image in this video if you’re worried about rewiring your brain.

Called the McCollough effect, it involves staring at images of vertical and horizontal lines, and it can make black and white look like green and red for up to three and a half months.

The effect was first discovered by American psychologist Celeste McCollough Howard in 1965, and explained by YouTube user Tom Scott on his channel Things You Might Not Know.

Next, you must stare alternately at a square containing horizontal red and black stripes, and then a vertical green equivalent for up to three minutes – alternating between staring at the centre of both for several seconds.

Once this is done, stare back at the original grid image of black and white gratings.

“I realize that telling people on the Internet not to do something is like telling a five-year-old not to stick beans up their nose, but seriously if you work with text or video, don’t do this,” Mr Scott says in his YouTube video.

“It’s quite scary, it’s a real image that can lock into your brain, change the way it works and stick around for a good while,” he adds. 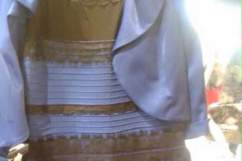 What Color Is This Dress? Mystery Solved

Read More
watch
Beware! Don't stare at the image in this video if you're worried about rewiring your brain.