On tonight’s episode of Teen Wolf, a car ride with Theo and Malia gets a little crazy. Check out the sneak peek in the above video.

In episode 5, titled “A Novel Approach”, even more problems arise when Scott’s pack heads to mental hospital Eichen House. The official synopsis reads: The pack enters Eichen House in order to learn more about the Dread Doctors. Stiles was being attacked at the end of episode 4 and in the promo for tonight’s episode 5, it looks like he’s with Lydia in Eichen House where the group goes to see Dr. Valack (Steven Brand). In addition, the doctor with a third eye is locked up there and he can give people visions of the future.

Another occurrence on tonight’s episode is that Scott and Kira find out bodies have been stolen from the morgue. 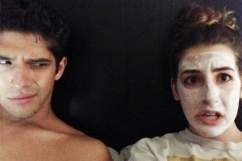