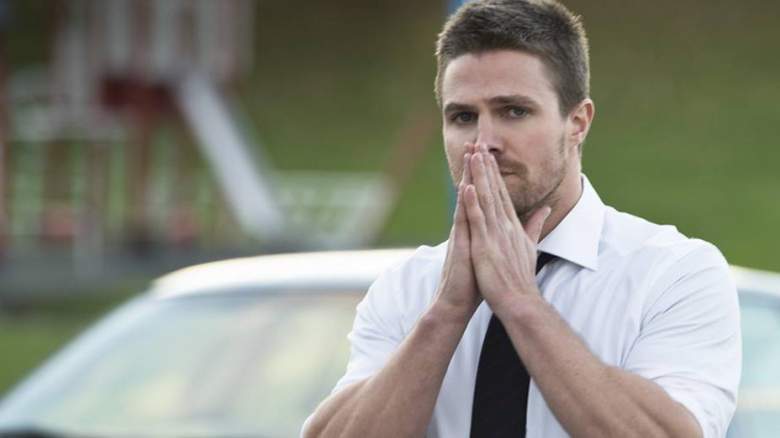 Things have taken a turn for the worst for Oliver Queen after last week’s midseason finale of Arrow. (Facebook)

Read that again Arrow fans. Felicity probably isn’t dead. So, that’s a good thing. A really good thing. Not quite as good? Arrow isn’t back on TV tonight. In fact, despite last week’s heartbreaking and cliff-hanging episode, Arrow won’t be back on TV for awhile. The CW hit is taking its regular winter break before returning to screens next year. That’s right. We’ve got to wait until January 20 before we see an Olicity reunion of massive romantic proportions.

In the meantime, luckily, there’s already a brand-new preview clip for the winter premiere. Check it out:

Now, we know what that looks like. It looks like Felicity is dead. Go ahead and scroll back up and read what was up there; Felicity probably isn’t dead. It’s cool if you’re not overly confident in that, but take a look at what producer Wendy Mericle said:

(Oliver and Felicity’s relationship is) definitely going to come to a head in the middle of the season. I can’t tell you exactly how that’s going to happen. But…obviously for the arc of Oliver and Felicity’s relationship this season, the fact that he’s keeping this from her—true to what we’ve done on the show, if there’s a secret somewhere, it’s going to come out and it’s going to have some serious consequences. We’re really excited about how that’s going to change things and it’s really going to raise the stakes and throw some wrenches into the works of their relationship — which so far this season has been pretty smooth sailing. True to form, we’re going to really mine that. There’ll be some fallout for both of them.

That doesn’t exactly sound like a producer who has killed off one half of their show’s most popular relationship. So, who is buried in that grave then? There are rumors circulating that it might actually be Damien Darhk. Yup. The big bad is going down.

Also, something to keep in the back of our spoiler-reading minds; Oliver has a son. He hasn’t made an on-screen appearance yet, but the boy is expected to have “a role to play,” particularly in the second half of the season.

Arrow returns to the CW on January 20 and airs Wednesdays at 8 p.m. ET