Drama around the holidays continues to dominate The Young and the Restless on its Monday, December 7, 2015 episode as some shocking news surrounding baby Sully was revealed. Also, the situation between Billy (Burgess Jenkins) and Victor (Eric Braeden) continues heating up.

Here’s what you need to know for the December 7, 2015 Y&R installment. 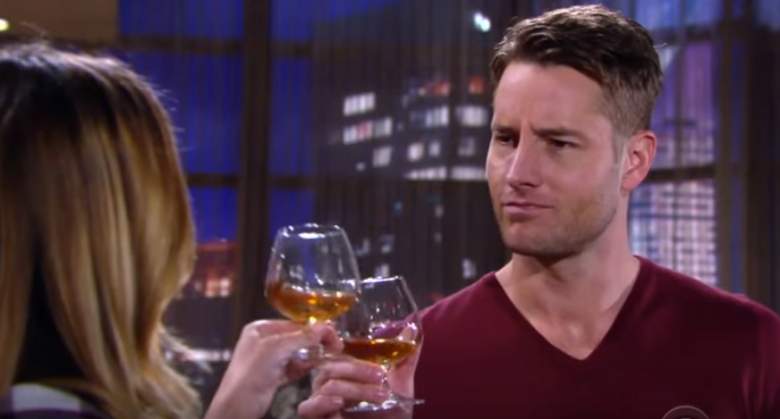 Adam Newman is a rock in a hard place on Monday’s episode when he learns about some shocking news surrounding Sage. (CBS Screenshot)

According to Celeb Dirty Laundry, Adam (Justin Hartley) learns that baby Sully is really Sage’s (Kelly Sullivan) son. Adam has a difficult time breaking the news to Nick (Joshua Morrow). Despite this, Adam will do what is necessary to keep his family together.

While Chelsea (Melissa Claire Egan) is grateful for Sage’s part in bringing her and Adam back to one another, Chelsea wants to know if she’s fallen for Adam.

“You fell in love with him, didn’t you?”

This catches a nearby Adam off guard.

Billy Abbott finds himself increasingly on his own as Y&R heads further into the holiday season. (CBS Screenshot)

Phyllis (Gina Tognoni) tells Billy that he needs to get sober so that they can better deal with Jack (Peter Bergman). But Jack is aware of the situation; Phyllis admits that she enjoyed feeling empowered.

At the GC Athletic Club, Jack informs Billy that he’s now on his own.

Jack has some harsh words for Victor:

Victor brushes those comments off with a smile.

Dr. Anderson May Have an Ulterior Motive Against Nick

Nick Newman may be facing payback from a bet gone wrong he made during his teenage years.(CBS)

While teenagers, a wager between Dr. Anderson and Nick led to a severe diving accident, suggesting that Sandy may be keen on revenge.

Nick wants to see Sage at the penthouse, but Adam won’t allow it. Nick recalls him leaning on Phyllis over Sharon following Cassie’s (Camryn Grimes) death.

Victor Newman may be looking for retaliation in a big way on Monday’s Y&R episode. (CBS Screenshot)

Victor reveals that he’s gunning for Jabot; threatening that to sue and ruin Phyllis (Eileen Davidson).

Also, Kevin (Greg Rikaart) returns from Geneva and Mariah (Camryn Grimes) isn’t thrilled about the hacker he met there.

Tuesday’s The Young and the Restless Spoilers

Jack informs Adam that he’s around to collect.

Nick lets Noah (Robert Adamson) in on his issues with Sage, saying his giving her the space she needs to deal with her stuff.

“You said you knew where she was.”

“Was that just a ploy to get me to come to Spain with you?”