Tempers continue flaring and relationships resume being tested when The Young and the Restless picks up on Tuesday.

Click the following link to stay up to date: The Young and the Restless Spoilers

Billy finds himself on the receiving end of a verbal lashing from Victor about his broken family. (CBS Screenshot)

Jack (Peter Bergman) is on the heels of a blockbuster confession; regarding his own crimes and Victor’s. Monday’s episode saw him readied to deliver Genoa City one of its biggest public blows. However, Phyllis (Gina Tognoni) and Ashley insisted he consider the Abbotts’ futures before his own revenge.

If Jack confesses, he may not only find himself behind bars, but also cost his family a lot more than their reputation. This may have him reconsidering his initial plans on exposing Victor.

Victor — knowing he’s about to go to war — speaks his mind to Billy about the Newman-Abbott ordeal while an emotional Victoria looks on. Much like his brother, Billy is determined to hurt Victor down at all costs; even riling up Jack.

“You are responsible for the downfall of your family.” 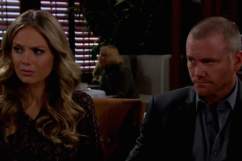 The Young and the Restless (Y&R) Spoilers: Abby Gets Hurt

Nick Confides in Sharon Over Sage

Nick will turn to a former flame for advice on his failing relationship with Sage. (CBS Screenshot)

Nick is undoubtedly feeling blue after several failed attempts at rekindling his dwindling romance with Sage. The latter — who’s still mourning the loss of Christian — revealed that she will be moving back into the penthouse; next door to Adam (Justin Hartley) and Chelsea (Melissa Claire Egan).

According to Soap Shows on December 14, Nick will turn to his ex, Sharon (Sharon Case) to ease his pain. Ironically, Sharon — who recently married Dylan McAvoy (Steve Burton) — continues to see her life blossom while Nick’s hurt keeps intensifying.

“Who you think Sully looks more like? Mommy, or Dylan?”

The strength of Sharon’s bond to Dylan just may be tested as Nick increasingly finds himself alone. 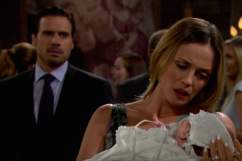 The Young and the Restless (Y&R) Spoilers: Billy Begs Victoria for His Family Back

Stitch was on the brink of a confession to Abby when Monday’s episode ended. On Tuesday, Stitch will confess the real details of the Newman Tower fire to Abby, who will then confront her mother over why she lied. Abby — no stranger to relationship deception — will have her heart tested when Stitch spills the beans on his lies.

“Why did you lie to me about Stitch’s almost last words in the fire?”

The Young and the Restless airs Monday thru Friday at 12:30pm ET on CBS. Be sure to check back with Heavy for all the latest spoilers.