The Bold and the Beautiful returns on Monday with an all-new episode as Quinn (Rena Sofer) panics over what to do with Liam (Scott Clifton) while Wyatt (Darin Brooks) follows up his kiss with some more sweet words for Steffy (Jacqueline MacInnes Wood).

Quinn Is Still Undecided on What to Do With Liam 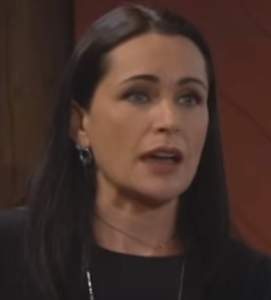 Quinn — pictured in Monday’s B&B episode — still remains indecisive over what to do with LIam. (CBS Screenshot)

Although Quinn wasn’t the biggest fan of Ivy (Ashleigh Brewer) for stomping all over Wyatt’s heart, she’s also not too fond of Liam either for related reasons. The misunderstanding between Liam and Steffy took a turn for the worse when he failed to show up at their home. Steffy deemed a text from Liam’s number — which was really sent by Quinn — as evidence that their relationship is through. Unbeknownst to Steffy, Liam passed out in the Forrester Creations parking lot and was taken to Topanga by Quinn.

Throughout the ordeal, Quinn has pondered back and forth on whether to take Liam to the hospital. Ultimately, she continues to keep him at her cabin. On Friday, he woke up for a brief time, but was disoriented.

On Monday, Quinn is still indecisive over what to do with Liam. She seemingly wants to buy her son more time with Steffy. 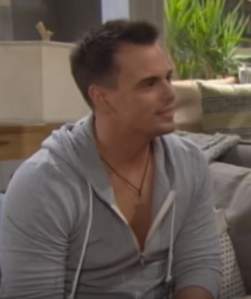 Meanwhile, Wyatt is making some serious leeway with Steffy as he continues to capitalize on Liam’s unattainability. Throughout Liam’s Australia debacle, Wyatt was there to comfort her. He even reassured her that the situation with Liam may not be as bad as it seems. Despite his words, he’s begun to push forward with her romantically.

On Friday, Wyatt took Steffy surfing in order to get her mind off Liam’s absence. When the two left the water, she thanked him for being there for her. Wyatt then planted a kiss on Steffy, which she warmly welcomed.

On Monday, Wyatt doesn’t ease up on his sweet talking. After coming indoors following their surf-and-kiss session, he again compliments her.

“You are too amazing of a person to just be wasted in pain.”

Will Liam be able to clarify his situation with Steffy before she falls for Wyatt, or will it be too late? 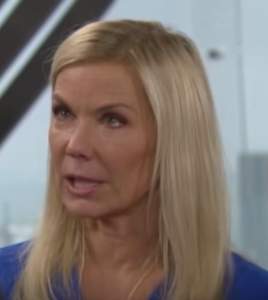 Brooke — pictured above in Monday’s B&B episode — finally puts her foot down to Bill for the sake of their relationship. (CBS Screenshot)

Hiring Brooke (Katherine Kelly Lang) to work at Spencer Publications seemed like a great idea; Katie’s (Heather Tom) certainly on board. However, Bill (Don Diamont) may have gotten a solid employee, but he can’t seem to keep his feelings for Brooke from occupying his mind.

On Friday, Bill resumes his fantasies for Brooke while the two tried co-existing as co-workers. The situation didn’t pan out too well. Brooke — who locked lips with Bill last week — finally put her foot down and told him their feelings cannot be acting on. She informed Bill that if they continued like that, it wouldn’t be right to his wife, Katie.

On Monday, Brooke acknowledges that they both feel the same way about each other, but insists that they can never act on it again. Brooke picks up that Bill — who keeps ignoring what’s right — isn’t grasping it.

“We’ve both been honest about our feelings, but we can’t act on that. Otherwise I can’t be here. You do understand that. Don’t you?”

Will Bill’s urges for Brooke ultimately destroy his marriage to Katie?

Read More
TV
Quinn's undecided on what to do with Liam, who's still at her cabin. Meanwhile, Wyatt continues sweet-talking Steffy after their kiss in Monday's The Bold and the Beautiful episode.