Actually, it’s Jimmy Fallon impersonating the iconic singer, but you can hardly tell the difference. The Tonight Show cameras capture Bob, sorry, Jimmy, as though he’s performing in the 1960s with a gauzy, slightly out-of-focus vibe. Fallon, who is skilled at impressions, nails Dylan’s quintessential mumbling and occasionally indecipherable speech. He also plays a mean harmonica.

The song “Hotline Bling” is no stranger to internet memes and parodies since Drake released the music video in October 2015. Fallon’s old stomping grounds Saturday Night Live even did a parody with Donald Trump providing his take on Drake’s unique dance moves.

The best part about Jimmy’s rendition is that it’s done without malice and actually feels like a warm tribute to both Drake’s lyrics and Dylan’s performance style, even while being perfectly ridiculous. 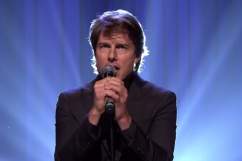